A recording of this song can be heard here and also on youtube:

Folklorist Neil Rosenberg corresponded with both Jack Kingston and Roy Rudolph, who both wrote songs about Springhill mining disasters. Rudolph suspected that Kingston was commissioned to write a song about the 1956 Springhill disaster by a competing company after his own song, “Miracle at Springhill,” was sent to Toronto by Rodeo to be pressed. Rosenberg suggests that Kingston was an obvious choice for such a commission since he had had a national hit with an event song about Marilyn Bell’s swim across Lake Ontario two years prior.

According to Kingston, who claimed to know nothing about Rudolph’s song when he wrote his own, he had performed at Springhill only a month prior to the explosion while touring nationally with Wilf Carter. He remembered being treated hospitably by local residents and therefore followed the news reports avidly. He went to the radio station where he worked and gathered all the news reports of the disaster. The explosion occurred on a Thursday and by the following Tuesday, he had completed a song. He called Quality Records and recorded it that night. It was released that Friday. Kingston performed it on the Main Street Jamboree radio show that Saturday as well as at a Toronto concert for 1,200 on Sunday. Apparently, the song was never widely distributed in the Maritimes but was popular in western Canada.

It was Thursday the first of November, 1956 was the year
From Springhill, Nova Scotia, the sad news we did hear
An explosion there did happen, at the entrance to the mine
To save the lives of those within, it was a race with time

Well over a hundred miners were trapped in Colliery four
And hope of their survival grew dimmer by the hour
Wives and families huddled ’round the pithead in the cold
The tears they shed, the prayers they said, can never be retold

For hours and hours they worked away, to reach them it was slow
Brave Draeger men were lost in vain to save the ones below
Hope grew fainter for their lives when Friday it was gone,
But Saturday brought new hope and joy, a few hours after dawn

The clouds that covered up the sky let through the sun to shine
They knew the Lord had heard their prayers, the first man walked from the mine
It soon was learned that more below were surely still alive
And hope grew strong as time went on that all trapped men would survive

Thank God so many did escape from the poisonous gas-filled mine
Thanks to the Draeger men who helped reach most of the men in time
We pray to God to comfort those who lost their loved ones dear
When the Springhill mine explosion brought sorrow, death and fear


10 responses to “Springhill Mine Explosion” 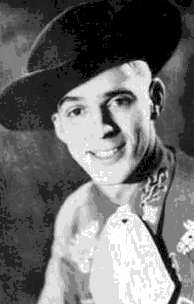 Jack Kingston (1925 – 1996) was an Ontario country singer who toured extensively on his own, but also with famous artists such as Wilf Carter and Hank Snow. Over his lifetime he relased more than 100 recorded sides. In 1949, he joined “Canada’s Largest Travelling Barn Dance” on CKNX, a Wingham Radio station, and within a year he was featured as the “Yodelling Cowboy.”

In 1950, he became the first Canadian country artist to sign wtih Capitol Records. His first release was “Yodelling Cowboy,” his theme song, which can be accessed via aMySpace page dedicated to his music. In 1952, he moved to Hamilton’s CHML to star in a new radio show, Main Street Jamboree, broadcast nationally. Kingston performed as a vocalist, ad-libber, and caller for square dance segments and travelled to venues throughout Ontario with the show, sharing the stage with a variety of other artists. The radio show eventually moved to TV in 1954 on Hamilton’s CHCH.

Kingston was particularly well known for his disaster songs. One tells of a Great Lakes steamer, Noronic, which caught fire on September 17, 1949, while docked in Toronto, killing 100 people. He also wrote two Springhill songs, this one about the 1956 disaster and another, “Miracle at Colliery Two,” about the 1958 disaster. Many of Kingston’s other songs make explicit references to Canada.

Although Kingston lived in Nashville 1959-63 and apeared on the “Grand Ole Opry” several times, he turned his back on the American music industry to return to the  Niagara region. He continued to perform, touring with a trio, making television appearances, and working with local radio stations. His last album, Happy Birthday Darling, was released in 1974.

(Much of this information was taken from the following document:
Cox, Terrance. 2000. Jack Kingston: “How Far is He Now”? Downtowner 16/4.)