The Ballad of Springhill

This is perhaps the most famous of all the Springhill disaster songs, not least because of Seeger’s and MacColl’s high profiles in the folk music world.  Having received international news coverage, Seeger learned of the disaster while living in France.  She did not record it right away, unlike most of the other Springhill songs, but instead performed it with Ewan MacColl (who helped write some of the verses) while in tour in Canada in 1959 and apparently performed it on a Halifax television show.  Rosenberg points out that whereas other Springhill songs reached a more limited regional and working-class audience, this one reached the young, middle-class audience drawn to music of the folk revival.

In 1960, it was published in Sing Out!, a major American folk revival magazine and that year Seeger and MacColl premiered the song in America at the Newport Folk Festival.  It was subsequently recorded, from the 1960s right up to the present, by a significant number of Canadian, American, and British folk artists, explaining why this song has become so well known

This song has been recorded by many other artists, including:

Many other amateur musicians have made their own versions which can be readily found on youtube and myspace.

In the town of Springhill, you don’t sleep easy.
Often the earth will tremble and roll.
When the earth is restless, miners die;
Bone and blood is the price of coal.

In the town of Springhill, Nova Scotia,
Late in the year of fifty-eight,
Day still comes and the sun still shines,
But it’s dark as the grave in the Cumberland Mine.

Down at the coal face, miners working,
Rattle of the belt and the cutter’s blade,
Rumble of the rock and the walls closed round
The living and the dead men two miles down.

Twelve men lay two miles from the pitshaft,
Twelve men lay in the dark and sang
Long hot days in the miners’ tomb
It was three feet high and a hundred long.

Three days passed and the lamps gave out
And Caleb Rushton he up and said,
“There’s no more water nor light nor bread
So we’ll live on songs and hope instead.”

Listen for the shouts of the barefaced miners,
Listen thru the rubble for a rescue team,
Six hundred feet of coal and slag;
Hope imprisoned in a three-foot seam.

Eight days passed and some were rescued,
Leaving the dead to lie alone.
Thru all their lives they dug their grave
Two miles of earth for a marking stone.

In the town of Springhill, you don’t sleep easy
Often the earth will tremble and roll.
When the earth is restless, miners die
Bone and blood is the price of coal.


14 responses to “The Ballad of Springhill”

by Peggy Seeger and Ewan MacColl 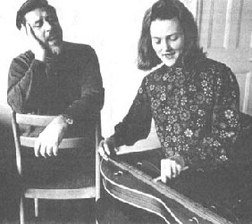 Peggy Seeger was born in 1935 to Ruth Crawford Seeger. A singer and multi-instrumentalist, she is considered to be one of North America’s finest female folksingers. Her best-known compositions are Gonna Be an Engineer and The Ballad of Springhill. Peggy has made 22 solo recordings, while dabbling in approximately 100 more recordings with other performers.

Born Jimmie Miller in 1915, Ewan MacColl changed his name in 1949. His parents were from Scotland and relocated to Salford, Lancashire, England, where MacColl was born. MacColl quit school when he was 14 years old and worked briefly at a number of jobs, including factory worker, builder, mechanic, and street entertainer. He is known especially for writing “Dirty Old Town” (recorded by Rod Stewart and The Pogues), “Freeborn Man” (The Pogues), and his Grammy Award-winning song “The First Time Ever I Saw Your Face,” a hit single for Roberta Flack in 1971 but written about Peggy Seeger.

MacColl first met Peggy Seeger in 1956. In 1958 they met again and performed as a recording duo, and then became life partners for the remainder of MacColl’s life. MacColl and Seeger collaborated with Charles Parker to produce BBC radio documentaries on current events. The trio blended sound effects, taped speeches, and newly written and traditional folk songs into finished products that became known as “folk documentaries.”

From 1959 onward, MacColl and Seeger encouraged and set standards for the burgeoning UK folk revival; they trolled the USA & UK field recordings and anthologies for little-known traditional songs; they trained other singers and involved them in political-musical documentary theatre; they instigated the revolutionary Radio Ballad form. However, Seeger stopped working when Ewan died in 1989.